I have written about weaknesses in the Windows 10 TCP/IP CUBIC congestion control mechanism in both this blog (Slow performance of IKEv2 built-in client VPN under Windows) and in a number of threads in the Microsoft Q&A site (that typically mention slow upload speed only under Windows (good speed under other OSes)); I also mentioned some links that suggested improvements were under development.

The improvements did not surface in any mainstream Windows 10 version of which I am aware; however Windows 11 does seem to incorporate substantial changes (at least an improved RFC 8985 (The RACK-TLP Loss Detection Algorithm for TCP) implementation with per-segment tracking), albeit with a least one minor bug which still limits performance (the bug is still present in Windows 11 build 22000.376).

The “bug” that I am referring to is a “sanity check” in the routine TcpReceiveSack. The problematic check is that if the SACK SLE (SACK Left Edge) is less than the acknowledgement (i.e. appears to be a D-SACK) then the SACK SRE (SACK Right Edge) must also be less than the acknowledgement; this appears to be coded incorrectly and means that genuine D-SACKs are not recognized as such. This failure to recognize D-SACKs means that tuning of things such as the “reorder window” does not take place.

The initial size of the “reorder window” (RACK.reo_wnd) is RACK.min_RTT/4 and it can grow to a maximum size of SRTT (Smoothed Round Trip Time). For many configurations and degrees of packet reordering, the default size eliminates many unnecessary retransmisions. However, in my test configuration (TCP inside an IKEv2 tunnel between two systems on the same LAN with substantial reordering introduced by the network adapter driver and a very low min_RTT (less than one millisecond)), the default reorder window size is completely inadequate.

A one-byte patch to tcpip.sys can (more or less) “correct” this problem (the patch does not handle sequence number wrap-around), enabling performance tests with and without the patch to be performed. This patching is risky (it will eventually result in a bug check when the change is detected by PatchGuard), but I judged the value of the performance test results to be worth the inconvenience.

What follows are traces of two 10 MB “discards” (TCP port 9), with and without the patch: 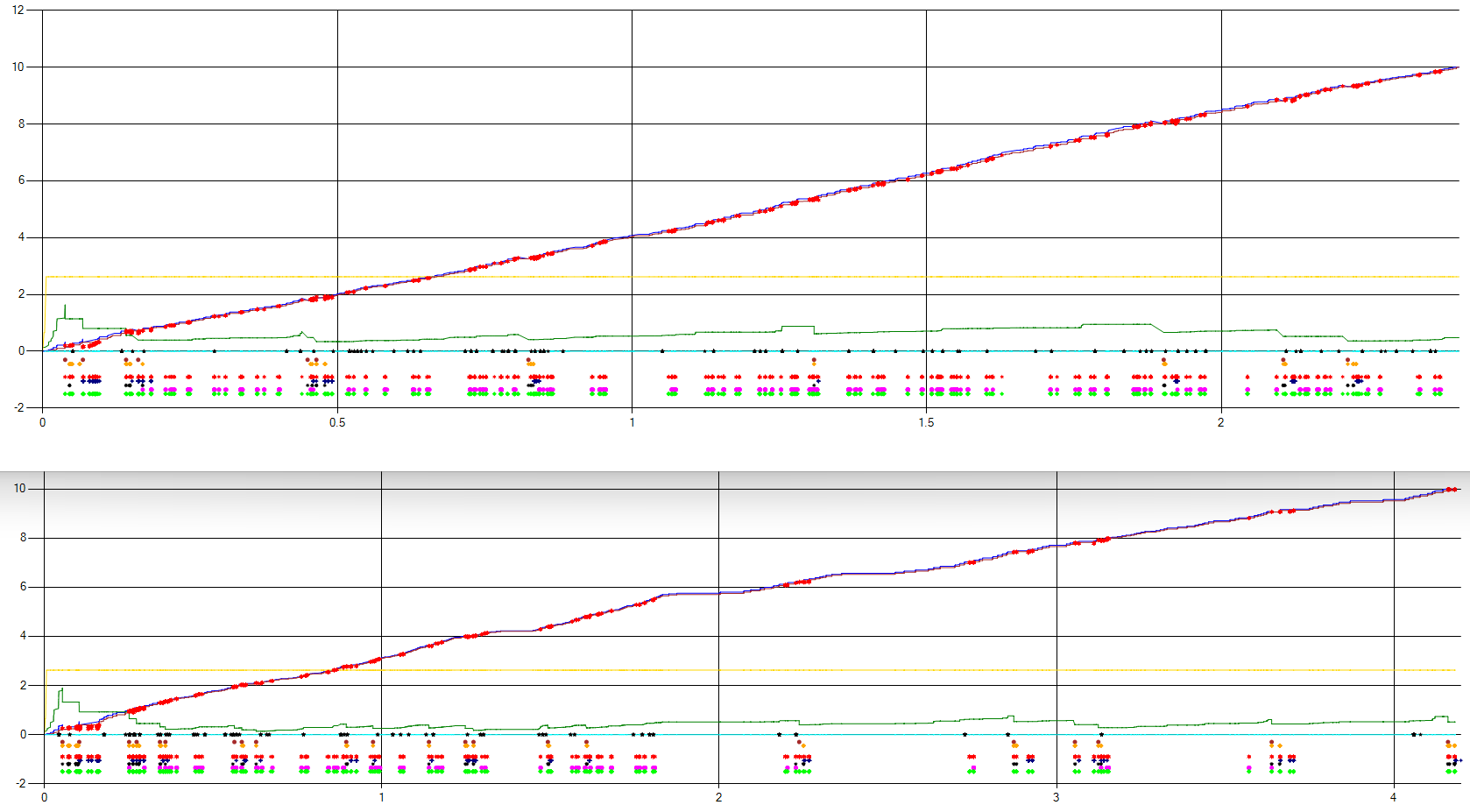 The green line (the congestion window size) is reduced more without the patch, although there is less “reordering” than in the patched test. The yellow line is the send window size (auto-tuned by the server) and is indeed approximately the minimum window size needed to achieve the theoretical maximum throughput.

The dots on and below the x-axis are points at which “interesting” events occur; from the x-axis downwards:

A graph of the Windows 11 trace data gathered by someone with a “real world” setup (minimum RTT of about 9 milliseconds and using SMB file copy to generate the traffic) and no patching looks like this:

In this case, the initial reordering window was large enough to allow almost all reordering to be detected (and therefore to avoid spurious retransmissions).

The trace where D-SACK recognition is working shows that congestion window reduction following a retransmission is not “undone” in the case that a D-SACK shows the retransmission to have been spurious; this may mean that Windows 11 will not perform as well as some other operating systems when sending TCP data over a path where some packet reordering is present.